Filipinos for Affirmative Action (FAA) will host the first ever Pinay Jazz concert at the Oakland Asian Cultural Center in historic Oakland Chinatown on April 16, 2009, where we will honor Tessie Guillermo, CEO of ZeroDivide. ABS-CBNs Balitang America reporter Henni Espinosa will emcee the benefit event.

We’re proud to present a cross-generational cast of talent that will perform classic and Latin jazz standards. Many of the performers also write, arrange and perform original compositions.

In the spirit of recognizing these accomplished female singers, FAA will honor Ms. Guillermo for her outstanding leadership and contributions to not only the Filipino community, but communities of color nationally.

She has been an advocate for reducing the digital divide in her role as CEO of ZeroDivide, which invests in community enterprises that leverage technology to benefit people in low-income and other underserved communities, and an advocate for health access as former Executive Director of APIA Health Forum. She is on numerous boards and is an Inaugural Member of the President’s Advisory Commission on Asian Americans and Pacific Islanders.

Tickets and sponsorship opportunities are still available. As an event sponsor, your organization can expect to reach more than 300 community members and leaders who will be on hand to catch this rare performance. 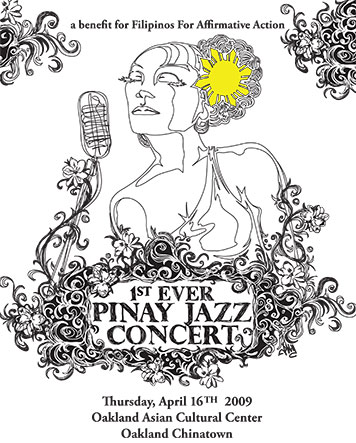